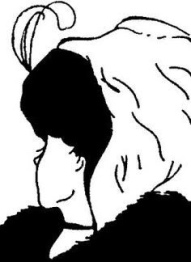 What do you see in the picture on the left? As young woman looking over her right shoulder, or an old woman wearing a scarf? Both are correct.

When things began to “heat up” in John’s gospel (chapter 7) , Jesus told His listeners, “Do not judge by appearances; but judge by right judgment.” (v. 24) As I read that my mind quickly went to the Old Testament story of young king David. You may recall the story (I Samuel 16).

The prophet Samuel was sent to the “house” of “Jesse the Bethlehemite”. From his sons, God had already “selected” the nation’s next king.  In preparation, Samuel offered the obligatory sacrifice. Jesse and his sons came to the sacrifice. When Samuel saw Jesse’s son Eliab, he thought, “Surely this is the Lord’s anointed.” But the Lord  said “no”. “Do not look on his appearance or the height of his stature, because I have not chosen him. The Lord sees not as humans see. They look at the outward appearance, but I look at the heart.'” (I Samuel 16: 6&7)

And so it went through seven of Jesse’s sons.  Finally the prophet Samuel asked it Jesse had any more sons?  “Well,” Jesse stammered, “there is one more, the youngest; but he is watching the sheep.” The word for “the youngest son” implies” insignificant” or “unimportant”. Some may say that the youngest son, David, was “the runt of the litter”.  Yet, as we soon learn that the runt is God’s chosen.

Like Samuel, and like the crowd Jesus spoke to, we have a tendency to judge by outward appearances. “He looks ‘presidential’.” “He’s so tall he must have played basketball.” “She’s too pretty to be smart.” You know the stereotypes. And they are usually wrong. The person who looks like a leader, isn’t. The tall person never played basketball. The pretty one was valedictorian of her class. Appearances are deceiving. Character, “the heart”, is not. It takes time to know the character of a person. When we jump to snap judgments, we are too often wrong.

In a different gospel, at a different time and place, Jesus told His disciples that they could judge a tree by the fruit it produces. He wasn’t really talking about fruit trees. He was talking about “character”. We would be wise to suspend judgment.

Lord, remind me not to jump to quick conclusions or snap judgments. Help me to listen to not only my instinct but Your still small voice. Let me be patient enough to see the fruit of ones character. Amen.